6 Natural Nootropics to Boost Your Brain

Our brains are our most important tools. It is therefore no surprise that a lot of research has gone into ways to boost the brain and prevent cognitive decline. Pharmaceutical companies have spent a lot of money developing and marketing synthetic nootropics such as Adderal, Ritilin, and Modafinil. The problem with many of these is their potential for addiction and abuse. As a result many are classed as controlled substances in the US, and illegal substances in many European countries.

Bacopa Monnieri is a plant used for centuries in traditional Indian Ayurvedic medicine for a variety of benefits. These include improved memory, boosted brain function, and reduction of stress and anxiety. It has become a popular supplement in the western world following studies (1,2,3,4) showing significantly improved memory and thinking skills with use.

Bacopa Monnieri can be taken in capsule form, or as a powder in smoothies or teas.

Ginkgo Biloba is a tree native to China used for thousands of years in traditional Chinese medicine. It contains many powerful antioxidants known to combat the damaging effects of free radicals. Studies have shown Ginkgo Biloba to significantly improve memory, brain function, and well-being (1,2). Some studies also found beneficial effects on anxiety and depression.

In addition to brain boosting benefits, Ginkgo Biloba is thought to help fight Cancer, Heart Disease, Stroke, and Arthritis, due to its anti-inflammatory properties.

Ginkgo Biloba can be taken in capsule, liquid, powder, or tea leaf form. Evidence from studies suggests it is safe to take 120 – 240mg per day divided into two or more doses.

Phosphatidylserine is a compound derived from Amino acids found in the brain in large amounts. It covers and protects cells in the brain and carries messages between them. Studies have shown Phosphatidylserine to support many cognitive functions including; memory, learning, focus, problem solving, and communication skills. It has also been shown to support motor functions, especially rapid reactions and reflexes.

Phosphatidylserine decreases in the brain with age, so supplementing this substance may prevent age related decline. It also may have the potential to treat diseases such as Alzheimers.

Usual dose of Phosphatidylserine is around 300mg per day to see beneficial effects on memory. It can be taken in capsule form.

You can get sufficient amounts of fish oil by eating at least two portions of oily fish a week, such as sardines, mackerel or salmon. However if you are not getting enough in your diet, fish oil supplements are highly recommended due to their myriad of health benefits.

In addition to brain boosting impact, fish oil has beneficial effects on heart and skin health, and anti-inflammatory properties.

Fish oil can be taken in capsule or liquid form. The recommended daily intake for EPA and DHA is between 250 and 500mg. Typically around 1000mg of fish oil supplies 300mg of EPA and DHA.

Lions Mane (Hericium erinaceus) is a tasty culinary mushroom often used as a seafood alternative. It’s fruiting body resembles a mane of shaggy white fur, hence the name. It has a long history of use in Chinese medicine and contains many beneficial bioactive substances.

Studies (1,2,3) have shown substances in Lions Mane to promote nerve growth and protect the brain against Alzheimers related damage. One study managed to show reversal of Alzheimer’s like symptoms in mice using Lions Mane supplements.

Some studies have also shown Lions Mane to reduce anxiety and depression. Lions Mane can also be used to treat stomach problems, and is thought to have gastroprotective effects.

Typical doses of Lions Mane are around 500mg per day. It can be taken in capsule form, or increasingly popular mushroom coffee, which often includes other medicinal mushrooms.

Tyrosine is an amino acid naturally produced in the body which helps make a number of important compounds. These include; Dopamine, Adrenaline & Noradrenaline, and Thyroid hormones which regulate metabolism among other things.

Studies have show Tyrosine to significantly improve working memory during mentally demanding tasks. It has also been shown to significantly improve cognitive flexibility, which relates to the ability to switch between tasks or thoughts. Tyrosine is thought to protect the brain from stress, and as such cause improved performance in stressful or mentally demanding situations, as this study shows. In addition, it’s been shown to counteract some effects of sleep deprivation, allowing subjects of this study to stay alert for three hours longer than usual with one dose.

Greatest anti-stress effects have been seen when Tyrosine is taken 30-60 minutes before a stressful situation at 100-150mg per kg of bodyweight. Tyrosine can be taken as L-tyrosine in capsule form.

Nootropic stacks are formulas of nootropics put together to complement each other, allowing for a multitude of benefits in one hit. These pre-mixed formulas vary from brand to brand, with each claiming their own to be superior. Although sometimes expensive, buying pre-mixed nootropic stacks is likely to be cheaper and less hassle than buying individual supplements.

Below are what I believe to be the two best natural nootropics stacks available today. They have been selected for their impressive mix of natural nootropics, and lack of stimulants like caffeine, which often give a falsely positive “mind boosting” impression.

Mind Lap Pro provides the most comprehensive mix of natural nootropics, while Alpha Brain from Onnit provides most of the bang for much less buck. 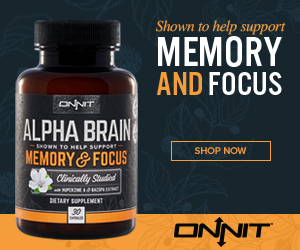 If you found this article interesting, or have anything to add, please leave a comment in the section below. Thanks!